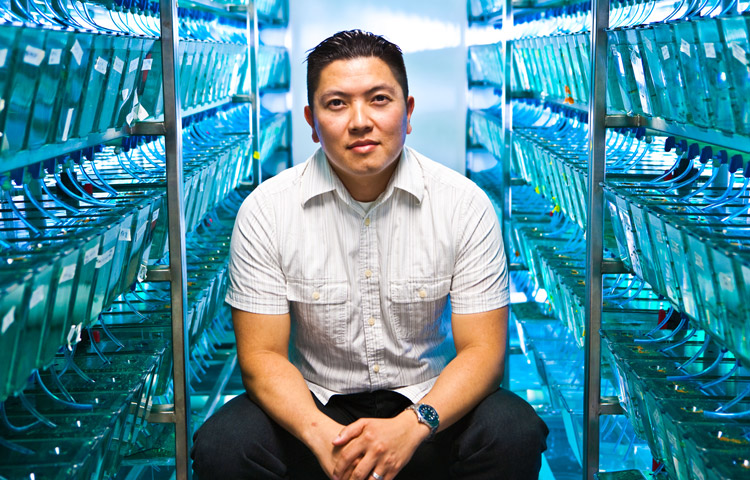 Researchers from Sanford Burnham Prebys have discovered a new source of stem cells just outside the liver that could help treat people living with Alagille syndrome, a rare, incurable genetic disorder in which the bile ducts of the liver are absent, leading to severe liver damage and death.

The findings, published recently in the journal Hepatology, have extensive biomedical implications for Alagille syndrome and for liver disease in general, including cancer.

“We’ve been aware of the regenerative power of the liver for a long time, possibly even going back to the ancient Greek myth of Prometheus,” says lead author Duc Dong, Ph.D., an associate professor in the Human Genetics Program at Sanford Burnham Prebys. “But the existence and nature of liver stem cells remains an intensely debated topic.”

The new study suggests that the reason these cells have been so hard to find may be that researchers have been looking in the wrong place.

“The stem cells that we found are actually outside the liver, not within it, which may have made their discovery difficult,” adds Dong. “We think these ‘outside the box’ liver stem cells act more like reserves, only traveling into the liver when all other options are exhausted. It only requires a few of these cells to enter the liver and multiply to repopulate all of the cells lost to the disease.”

Over 4 thousand babies each year are born with Alagille syndrome, which is caused by a mutation that prevents duct cells from forming in the liver. And while the syndrome can occasionally resolve naturally, and there are treatments available to manage the symptoms, the disease is incurable, carrying a 75% mortality rate by late adolescence for those without a liver transplant.

"We have known and supported Dr. Dong for years and we feel the work he and his team have done on this disease to date is extraordinary," says Cher Bork, Executive Director of the Alagille Syndrome Alliance. "Hope can be difficult to come by for families dealing with any incurable disease, and discoveries like this help give that hope back to families living with this life-dominating condition."

Using zebrafish, which have many of the same genes and cellular pathways as humans, Dong’s research team were able to create a model of Alagille syndrome by selectively deactivating genes associated with Alagille syndrome. These genes encode for chemical messengers from the Notch pathway, a signaling system found in most animals that is involved in embryonic development and adult cell maintenance.

“Our work suggests that there is potential for liver regeneration in Alagille patients, but because this signaling pathway is mutated, the regenerative cells fail to fully mature into functioning liver duct cells,” says Dong.
In further animal studies, the team showed that by genetically restoring this signaling pathway, the regenerative cells could remobilize to form liver ducts, restoring the function of the liver and improving survival. The researchers are now leveraging their discovery to develop new therapies for Alagille syndrome.

“We’ve shown not just that regeneration is possible in models of Alagille syndrome, but, importantly, how it can be enhanced,” says Dong. “These missing duct cells can regenerate if Jagged/Notch is restored, and our lab has developed the first drug that can boost this pathway.”

While the new drug requires further studies to advance into clinical trials, the team has already found that it could enhance regeneration and survival in animal models and can trigger the Notch pathway in cells from Alagille patients. These results will be published in separate studies.

“We’re hopeful that this drug will restore the regenerative potential of the liver in Alagille patients, to be more like the liver of Prometheus,” adds Dong.