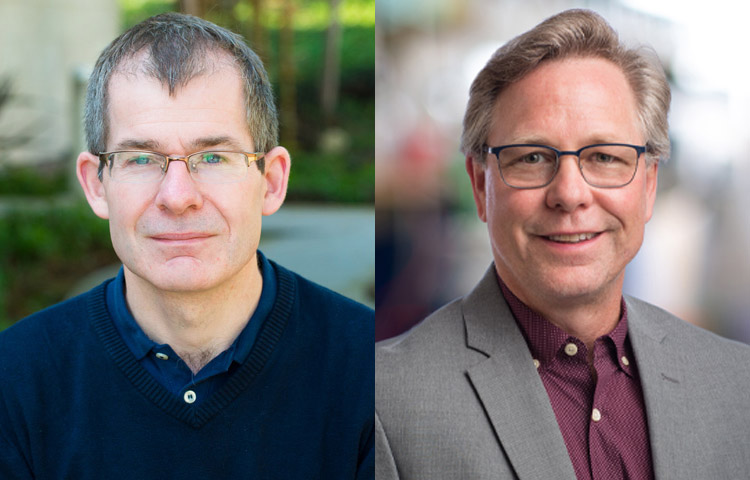 Sanford Burnham Prebys professor Peter D. Adams, Ph.D., who directs the Aging, Cancer and Immuno-oncology Program and Salk Institute professor Gerald Shadel, Ph.D. have been awarded a grant from the NIH’s National Institute on Aging for $13 million, funding a five-year project to explore the connection between aging and liver cancer.

“If we can understand why the incidence of liver cancer increases with age, that gives us more opportunity for detecting, treating, and preventing it,” says Adams. “We hope that what we learn here can then be extrapolated to other cancers as well.”

Liver cancer is one of the leading causes of cancer death worldwide, killing over 700,000 people per year. And while liver cancer is less common in the United States than in other parts of the world, its incidence has increased over the last several decades. Doctors understand that age is a risk factor for liver cancer, but the precise molecular mechanisms behind this increased risk with age remain a mystery—one that the researchers aim to solve with their new NIH funding.

“We will explore how metabolic, epigenetic, and inflammatory processes conspire during aging to promote liver cancer,” says Shadel, “This integrated approach will help us shed light on how liver cancer is developing over time, and hopefully lead to new therapeutic approaches.”

The team hypothesizes that the biochemical mechanisms at play in age-related liver cancer are directly dependent on interferon signaling, a process in which special proteins in the body signal the presence of viruses or cancer cells.

Throughout the five-year project, the researchers will undertake a comprehensive study of how chronic interferon signaling influences several biochemical processes in age-related liver cancer. These include senescence, a cellular stress response associated with aging that is already a major focus of Adams’ research. They’ll also investigate the links between liver cancer and malfunctions of mitochondria and metabolism that occur during aging.

“Mitochondria are commonly known as the ‘powerhouses’ of the cell, but that’s not the only role they play in the body and they get damaged with age,” says Shadel. “My lab focuses on how mitochondria provide stress signals to the rest of the cell during aging and immune responses, so partnering with Adams and others on this project is a natural fit.”

By parsing out the molecular biology of age-related liver cancer, the researchers’ ultimate goal is to investigate approaches to preventing and treating liver cancer by targeting age-related processes, like chronic interferon signaling.

“Liver cancer is on the rise and disease outcomes are poor for patients, particularly older people,” says Adams. “There is a desperate need for better treatment and prevention options, and this project will arm us with the knowledge to develop them.”

In addition to Adams and Shadel, the research team includes Alessandra Sacco from Sanford Burnham Prebys, Susan Kaech and Maxim Shokhirev from the Salk Institute and Gen-Sheng Feng from University of California, San Diego. The grant is titled: Aging as a Risk Factor and Target for Prevention of Liver Cancer (P01 AG070384-01).