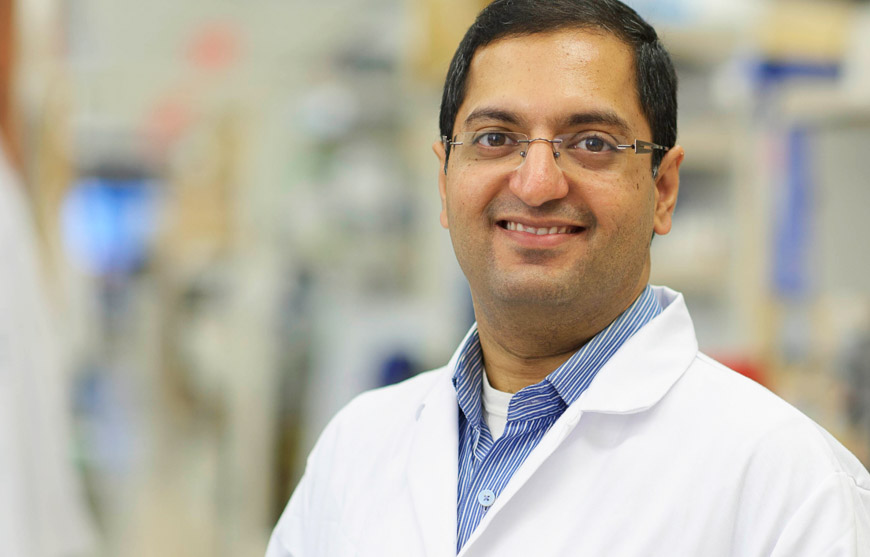 Finding a new treatment for AML.

Scientists are on the hunt for effective treatments for acute myeloid leukemia (AML), a deadly blood cancer. While a handful of targeted treatments have been developed for certain AML subtypes, the majority of patients still face limited treatment options—chemotherapy, radiation and/or a bone marrow transplant. Even so, many patients don’t respond to therapy, or relapse after treatment.

Now, scientists from Sanford Burnham Prebys have shown that a protein called BMI1 is a promising drug target for an AML subtype in which two normally separate genes, CALM and AF10, fuse together. The findings, published in Experimental Hematology, provide a rationale for evaluating a BMl1-inhibiting drug that is currently in clinical development for solid tumors.

“Despite the recent arrival of targeted therapies for specific AML subtypes, the majority of patients still receive the same treatments that were used in the ’70s. This isn’t last-decade science; it’s last-century science,” says Ani Deshpande, Ph.D., senior author of the paper and assistant professor in the Tumor Initiation and Maintenance Program at Sanford Burnham Prebys. “Our study shows that BMl1 is a bona fide candidate for therapeutic targeting in this AML subtype and supports the immediate evaluation of an existing BMl1-inhibiting drug as a potential treatment.”

AML occurs when stem cells in the bone marrow malfunction and manufacture abnormal blood cells. The cancer is characterized by major chromosomal alterations, which range from additions and deletions to inversions and translations—when a piece of a chromosome breaks off and attaches to another chromosome. The five-year survival rate for adults with AML—the number of people who are alive five years after diagnosis—is 24 percent, according to the American Cancer Society.

In the study, the scientists investigated the role of BMl1, an epigenetic regulator of stem cell self-renewal in an AML subtype. In this subtype, two separate genes, CALM and AF10, that are located on two different chromosomes, abnormally join and form one single fusion gene with cancer-promoting functions. The researchers analyzed data in the National Cancer Institute’s Cancer Genome Atlas, a database of more than 20,000 molecularly characterized cancers, and demonstrated that BMl1 is over-expressed in pediatric and adult CALM-AF10-positive leukemias. Blood stem cells from mice with CALM-AF10 chromosomal rearrangements in which the BMl1 gene was removed did not transform into the malfunctioning cancer-causing cells—indicating the protein’s critical role in the development of cancer. Importantly, the researchers showed that PTC-596, which targets a pathway upstream of BMI1, prolonged survival in a mouse model of the CALM-AF10 subtype. This inhibitor is in clinical development for advanced solid tumors by PTC Therapeutics.

Next, the scientists plan to further validate the therapeutic target in additional cell and mouse models of AML. They are also exploring other possible targets that could be translated into effective therapies for the CALM-AF10 AML subtype.

“Developing laboratory models of these hard-to-cure leukemias is a critical step toward understanding the basics of AML,” says Karina Barbosa, the first author of the study and a Ph.D. student in the Deshpande lab. “We have only just begun to explore and uncover the different therapeutic vulnerabilities that exist for this deadly disease.”

Research reported in this press release was supported by the U.S. National Institutes of Health (NIH) (R00CA154880 and P30CA030199), ASH Scholar award, V-Foundation award, Leukaemia and Blood Cancer New Zealand, the family of Marijana Kumerich and the Lady Tata Memorial Foundation. The content is solely the responsibility of the authors and does not necessarily represent the official views of the NIH.

Ani Deshpande is a consultant at A2A Pharmaceuticals and Salgomed.