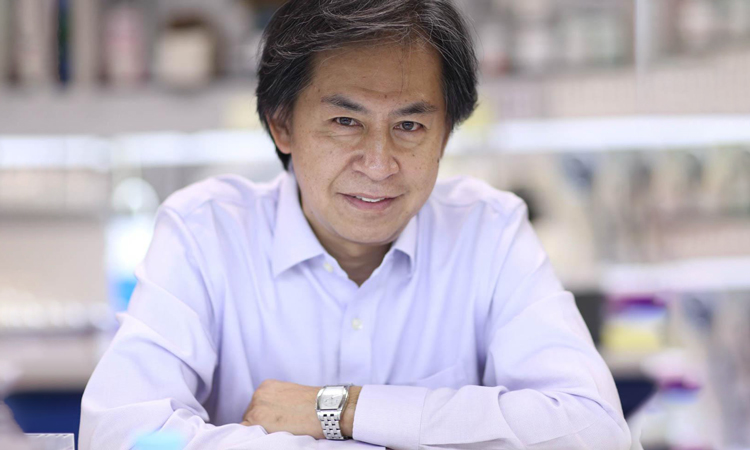 Sanford Burnham Prebys professor Yu Yamaguchi, M.D., Ph.D., has been awarded a $2.9 million grant from the National Institutes of Health to study the role of heparan sulfate (HS) in Alzheimer’s disease. HS is a structural molecule found in the scaffolding between cells that has been previously observed to influence the development of Alzheimer’s disease. However, the precise function it plays in the brain has not been studied closely.

The new project will fill this gap in knowledge and open new avenues for the diagnosis, treatment and prevention of Alzheimer’s disease.

“Our hypothesis is that heparan sulfate mediates the development of Alzheimer’s by binding to a brain protein that is critical for the development of the disease,” says Yamaguchi. “If we can develop an inhibitor to block this interaction, that could provide us with new ways to treat the disease.”

HS is found on the surface of cells and in the spaces between them. Importantly, it binds to a protein in the brain called APOE4. This protein is coded for by a version of the APOE gene, which has been thought to play a key role in Alzheimer’s. Everybody inherits a version of the APOE gene, but which version people have makes a significant difference in their risk for developing Alzheimer’s.

“Having the APOE4 gene variant in your genome, as opposed to having the APOE2 or APOE3 variant, is the most significant known risk factor for the development of late-onset Alzheimer’s, which is the most common form of the disease,” says Yamaguchi. “The fact that heparan sulfate has such a strong interaction specifically with the APOE4 variant suggests that the interaction between APOE4 and heparan sulfate may play a more critical role in the disease than we’ve previously understood.”

APOE4 is one of three different versions of the APOE protein, but it is the only version that increases the risk for developing Alzheimer’s, and it is the version that HS binds to most strongly. Yamaguchi and his team have also found in previous studies that heparan sulfate makes it more difficult for the brain to clear the accumulation of amyloid plaques, which are one of the hallmarks of Alzheimer’s disease.

“All the evidence we have so far suggests that there is an important relationship between heparan sulfate, APOE4 and the development of Alzheimer’s,” says Yamaguchi. “What remains to be seen is exactly what is happening in that interaction at the biochemical level that causes the disease.”

More broadly, the project will answer one of the biggest outstanding questions in Alzheimer’s research: Why does APOE4 increase the risk of Alzheimer’s?

“This has been a critical question for Alzheimer’s researchers for a very long time, and our new NIH funding is helping us tackle it from a new perspective,” says Yamaguchi. “This project will not only fill a major gap in our knowledge about the mechanisms of Alzheimer’s, but also help us find new targets to treat and prevent this devastating disease.”

The grant is titled “Microglial Heparan Sulfate in the Modulation of APOE Function and Neurodegeneration” (R01 AG072468-01A1).