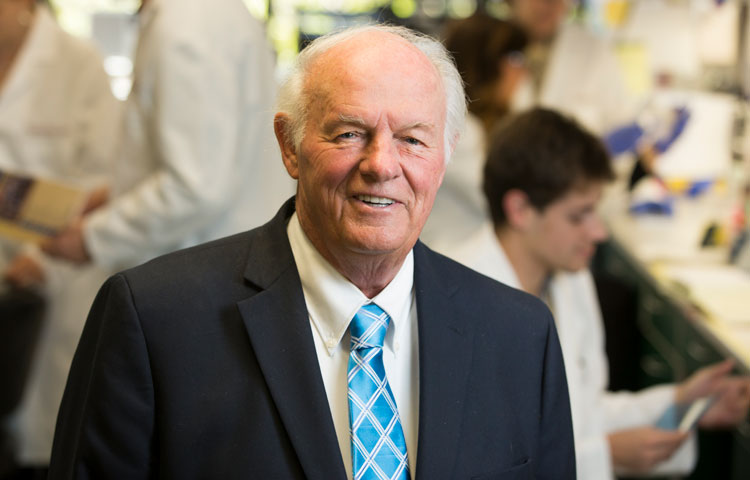 “Denny is a visionary committed to making a better world,” says David A. Brenner, M.D., president and CEO of Sanford Burnham Prebys. “This is a transformational investment in the continued strength of biomedical research at Sanford Burnham Prebys and across the Torrey Pines Mesa. We are grateful for his support, which helps us translate discoveries into improving human health.”

Over the next four years, the Institute plans to recruit outstanding early-career researchers and provide support as they develop into world-class scientists.

“Our goal is to recruit the smartest, most innovative scientists from the best laboratories in the top institutions in the world,” says Brenner. “In addition, this new gift will be used to invest in our current faculty and research infrastructure,” says Brenner.

“Biomedical research has changed,” adds Brenner. “These days, it’s impossible for young investigators to work on a project in isolation and be successful. Scientists need to collaborate with many different types of researchers with different technologies and different skill sets."

“Sanford Burnham Prebys brings everything to the table. We are highly collaborative and located in one of the best—if not the best—research communities in the world,” says Brenner. “This is an environment where brilliant people with different talents work together. We are able to attract the most promising scientists from around the world to join our exciting research community.”

Established in 1976 as the La Jolla Cancer Research Foundation, the Institute has since been renamed to honor generous monetary donations from Sanford, Roberta and Malin Burnham, and Conrad Prebys.

Sanford, an Honorary Trustee of the Institute, has a long-standing relationship with the Institute and was inspired to donate this new gift after Brenner was appointed president and CEO in September 2022.