Ebola expert weighs in on news of a potential cure 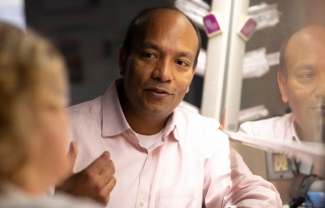 Scientists recently reported that two treatments saved the lives of people infected with the Ebola virus—with the New York Times reporting that roughly 90% of newly infected patients were saved—suggesting we are ever so close to a cure.

To place this news in context, we caught up with Ebola expert Sumit Chanda, Ph.D., whose team at Sanford Burnham Prebys is working to find a pill-based treatment for the deadly virus.

Tell us a bit more about Ebola and the recent outbreaks.
Ebola is a virus responsible for severe, often fatal, hemorrhagic fevers in humans—meaning it damages blood vessels and can cause internal bleeding, among other symptoms. The mortality rate varies between 50% and 90%. The 2014 to 2016 West Africa epidemic has been of unprecedented scope, with more than 28,000 reported cases and more than 11,000 deaths. Exported cases were also documented in the U.S. and Europe. Since August 2018, a new outbreak is ongoing in the Democratic Republic of the Congo, with more than 2,800 total cases reported and more than 1,800 deaths. So far, no medication can treat people already sickened by Ebola (an experimental vaccine has shown effectiveness).

Describe the study and key findings for us.
Last November, several potential treatments were evaluated in clinical trials in the outbreak area. Two of these treatments, mAb114 (Ridgeback Biotherapeutics) and REGN-EB3 (Regeneron Pharmaceuticals), were found to be highly effective in reducing Ebola-related deaths. These drugs are monoclonal antibodies, which are protein-based therapies—the same kind that are currently being used to treat cancers, autoimmune and other diseases.

What is your reaction? Is this big news? Or is more research needed?
This is a very important result. For the first time, a clinical therapy significantly reduced mortality after Ebola exposure—especially when given early after infection. While it cannot be called a “cure,” since not everyone taking the therapy survived, it represents a hugely important advance by the scientific community and brings hope to people exposed to this virus and in the outbreak regions.

What does this advance mean for people infected with the Ebola virus?
People impacted by Ebola have so far been skeptical about medical treatment, especially considering the low success rate of previous treatments. We expect that the high survival rate associated with these two treatments will encourage infected individuals to go to Ebola treatment centers. This will increase the number of people receiving the treatments, reducing the total amount of deaths and helping contain the spread of the virus.

What does this news mean for the quest to find an Ebola treatment?
This remarkable achievement gives me hope that a cure is possible, potentially by combining these therapies with additional drugs. There is more work to be done, however. These antibody-based treatments require administration by a medical professional in a specialized Ebola treatment center and can be expensive. An Ebola therapy that comes in the form of a low-cost pill—the focus of my lab’s work—will be easier to deploy to patients, especially in areas that do not have access to advanced facilities. Since it appears that early treatment is important, easy availability to a medicine will benefit rural patients who are usually at the epicenter of an outbreak—and will help prevent an epidemic from taking root in the first place.

Anything else you’d like to add?
We are now, more than ever, hugely optimistic that efforts to develop an Ebola antiviral drug, especially one that is low cost and can be easily distributed in affected regions, will be part of a complete cure regimen for Ebola.

Sumit Chanda, Ph.D., is the professor and director of the Immunity and Pathogenesis Program at Sanford Burnham Prebys. His team works to find new treatments for infectious diseases, including influenza A (flu), human immunodeficiency virus (HIV) and Ebola virus, by unraveling the cellular machinery that allows these viruses to thrive.