Expanding the options to treat melanoma 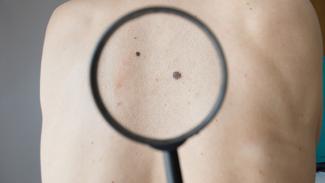 Melanoma is the most deadly form of skin cancer with approximately 10,000 deaths per year in the U.S. and more than 65,000 worldwide. Although there are more and better treatment options available today than in previous years, there is still an urgent need to develop drugs that target the numerous pathways melanoma cells use to multiply, spread, and kill.

Ze’ev Ronai, Ph.D., scientific director of Sanford-Burnham’s La Jolla campus, is leading a research program to do just that. His most recent study highlights the signaling molecule PDK1 as a potential therapeutic target for melanoma treatment and identifies SGK3 as one of its important downstream regulatory components.

“We previously found that PDK1 is crucial for the formation and metastasis of melanoma, and that inhibition of PDK1 could delay its development and spread,” said Ronai. “Our recent study takes this to a new level, where we are able to determine which tumors respond better to PDK1 inhibition. A focused therapy on PDK1 and the related PI3K signaling may be sufficient to eradicate melanoma. These findings expand the current repertoire of targets, especially those out of the BRAF/MEK signaling axes.”

This latest research, published online in Cancer Research, unveils the role of PDK1 in melanoma cells that have a normal copy (wild-type) of PTEN, a tumor-suppressor gene. Approximately 70 percent of melanoma tumors with a mutated BRAF gene harbor a wild-type PTEN gene, making the combination of mutant BRAF/wild-type PTEN one of the most common genotypes found in melanoma.

The study shows that PDK1 plays an even more significant role in melanoma tumors that harbor the wild-type PTEN genotype. This was demonstrated through the use of a combination of human melanoma cell lines and genetically engineered mice harboring specific, representative mutations of the genes involved in the signaling pathways under investigation. Since PDK1 controls more than 20 protein kinases, the study also examined which of those may be more important for melanoma development, which led to the identification of the PDK1 substrate SGK3 as one contributing to PDK1 functions.

“The search for PDK1 inhibitors that are suitable for clinical development is ongoing, and these new results provide further justification for clinical evaluation of such inhibitors,” said Ronai, acknowledging the collaborative efforts of colleagues from MD Anderson Cancer Center, Yale University, National Cancer Institute, and faculty at Sanford-Burnham who made this work possible.

The paper can be found here.