From child neurology to stem cells: An interview with Evan Snyder 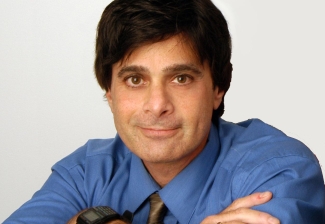 What do Evan Snyder and Sigmund Freud have in common? Both radically changed how we see the human brain.

In a first for San Diego, Sanford Burnham Prebys Professor Evan Y. Snyder, M.D., Ph.D. has been featured in the second edition of Child Neurology: Its Origins, Founders, Growth and Evolution, a collection of biographies detailing the lives of innovators in child neurology throughout history.

To celebrate this honor, we caught up with Snyder to discuss how his work in child neurology led him to make foundational discoveries in the fields of stem cell biology and regenerative medicine, as well as where these fields are headed in the future.

Plasticity, both at the “macro” sociological level and at the “micro” clinical level, always fascinated me. And that fascination with resilience and my curiosity about its source led to my early discoveries surrounding stem cells in the brain.

How does it feel to be included in this book?
Snyder: Ever since I was a student, I thumbed through the first edition and was inspired by all these old images of people from the early days of the field. To see my chapter in there along with the likes of Sigmund Freud is mind-blowing. It means a lot to be included.

How did your work in child neurology lead you to work on stem cells?
Snyder: I was always interested in resilience. As a kid, I worked at a camp for children with various challenges: poverty, behavioral issues, disrupted home lives. These children were being raised in terribly deprived environments with challenging family situations, but they adjusted and bore up without complaint. When we took them out of that environment, even for a short time, they flourished. I never forgot that lesson.

Later, doing my pediatric and neurology residencies and neonatology fellowship at Boston Children’s Hospital, I would care for babies in the newborn intensive care unit with seemingly devastating brain injuries. As a neurologist, I would often follow up with those kids months or even years later.

Despite the horrible injuries they had sustained as newborns, by the time they were children, some had recovered to the point where it was hard to notice a deficit—they were achieving their developmental milestones, were seizure-free off medications, and playing and interacting like normal kids.

It astounded me that some children could have that resilience while I knew that adults with those same injuries would likely be incapacitated. Plasticity, both at the “macro” sociological level and at the “micro” clinical level, always fascinated me. And that fascination with resilience and my curiosity about its source led to my early discoveries surrounding stem cells in the brain.

There was no notion that there could be such regenerative cells in a solid organ, particularly one that was thought to be as static as the brain.

How did your early work shape the stem cell field?
Snyder: Before I, and a few others, began examining the molecular biology of cell types that composed the brain, there really was no research area called the “stem cell field”—at least not for solid organs like the brain. What was known clinically about stem cells in the early ’80s was confined to the making of blood cells for bone-marrow transplants.

The goal of hematologists back then was to identify the youngest cell in the bone marrow that could give rise to other types of blood cells. That cell, called the hematopoietic stem cell, was difficult to isolate and identify, but it was always assumed to exist because a healthy person’s blood is always turning over.

There was no notion that there could be such regenerative cells in a solid organ, particularly one that was thought to be as static as the brain.

But from the very beginning, I had difficulty making containers of cells with a single specific identity, even if I started with what seemed to be a single cell and its identical sibling cells. The young cells I isolated always seemed to be changing their identities, even though they started out looking the same.

Colleagues observing my initial results assumed it was just an odd tissue culture artifact, but then I thought back to those kids with brain injuries for whom I’d cared, and I started thinking that maybe what I was observing wasn’t an artifact at all; maybe these cell types were one of the repositories of plasticity in the brain I had puzzled over—a “stem cell” of sorts.

To prove that notion, I quietly transplanted those stem cells into a mouse brain and waited two years to examine the brain. The cells I’d transplanted were not only still there but they had integrated into the fabric of the brain and taken on different identities depending on which part of the brain they took up residence.

This observation—which I made alone, in the middle of the night under a microscope—gave me chills that I still recall today.

I shuddered with excitement at the implication of what I was seeing. The central nervous system was always thought to be a part of the body that could not regenerate at all, yet here I had isolated cells from one mouse brain and used them to populate another brain with multiple cell types in multiple locations. I could make pots of those donor cells to be transplanted whenever and wherever I liked, like a bone-marrow transplant in the brain.

The potential seemed enormous, and my curiosity to see where that potential might lead in terms of understanding and healing the human brain became the focus of my lab—first at Harvard and then at Sanford Burnham Prebys.

Finding how we could address unmet medical needs became somewhat like looking for a lock for which we already had a key.

How did regenerative medicine enter the picture?
Snyder: Other people started finding stem cells, not only in the brain but everywhere in the body. In the mid-1990s, the focus then became figuring out how to exploit them. Those efforts helped give rise to the new field of regenerative medicine, where the emphasis is on repairing and regrowing tissues rather than just treating the symptoms of a disease.

We found that we could put these neural stem cells almost anywhere in the nervous system, particularly if that region was diseased or injured—and hit the “reset button” for that region. I was more interested in studying the overall biology of this new cell type rather than focusing on any one illness. So, while learning about this cell, we found many different ways that its biology could be exploited therapeutically.

Finding how we could address unmet medical needs became somewhat like looking for a lock for which we already had a key. Looking for those locks—the therapeutic obstacles that stem cell biology might help circumvent—is where my clinical experience proved handy.

One example was brain tumors. I’m not an oncologist, but I’d learned from my studies that stem cells will naturally go to regions where pathology exists in the brain, even over long distances from their point of implantation. So, by putting a therapeutic gene into a neural stem cell, I could use that cell like a “heat-seeking missile” to deliver that gene and its product to where it might be needed.

Brain tumors are often so difficult to cure because we can’t safely access all the brain areas where the tumor has infiltrated. The neural stem cell seemed a perfect way to deliver a tumor-killing gene to those disseminated tumor cells simply by harnessing their natural powers. That strategy has now moved into clinical trials, and the use of stem cells to deliver therapeutic genes is being used for other conditions as well.

What came next in the history of stem cells?
Snyder: If we fast-forward a few decades from the beginnings of regenerative medicine, we now know a lot more about the different “flavors” of stem cells, how they work, and how they can be therapeutic.

One of the new flavors of stem cells is induced pluripotent stem cells, or iPSCs. One can take a mature skin or blood cell and push it back to a state where it loses all of its organ identity, and then force it to become a completely different mature cell type.

Importantly, that induced stem cell retains many of the characteristics of the person from which it originally came, including diseases and genetic defects that individual may have had. This realization gave rise to the idea of modeling diseases in a dish.

Psychiatric disorders are the poster children for such complex and mysterious diseases. To date, there’s no psychiatric disease that we can attribute to a specific defect in a particular gene or protein. Nevertheless, I felt confident that we could use iPSCs to discover the underlying cause of challenging diseases where we have no prior knowledge of what has gone wrong.

I decided to zero in on bipolar disorder because, as a physician, I knew that this condition did have an effective treatment—lithium—which had been accidentally discovered many years ago without knowing why it seemed to help some patients.

I reasoned that If we knew lithium’s target, we could work backward, recognizing that whatever lithium was changing was the underlying cause of bipolar disorder. That strategy worked. We used the iPSCs to map the lithium-response pathway, and we learned that errors in the regulation of that pathway were the likely cause of bipolar disorder. With that in mind, we could discover drugs better than lithium.

Organs and their diseases never involve just one type of cell. If we want to improve the way we model diseases, we need to re-create and target that complexity.

Where is the field going from here?
Snyder: Our models for diseases are only going to get better. We’re moving away from looking at small numbers of homogenous cells in a flat dish toward creating more complex three-dimensional mini-organs from a patient’s stem cells, directing those cells to become the many different interacting cell types that make an organ.

Organs and their diseases never involve just one type of cell. If we want to improve the way we model diseases, we need to re-create and target that complexity.

As far as using stem cells directly for therapy, we’re becoming much more sophisticated in deriving the cell type we need and directing it to the specific regions in need of repair. Furthermore, as our three-dimensional representations of organs in a dish become more sophisticated, these mini-organs may themselves become the material we transplant.

I’m also certain that there are applications for stem cells we haven’t conceived of yet.

Every generation of scientists needs to be reminded that one is constantly going to be surprised; one’s initial hypotheses, based on old understandings, are likely going to be wrong. One must be prepared to revise those hypotheses when the data—even if counter to expectations—leads one in an unconventional or inconvenient direction.

Although we’ve made much progress in the stem cell field over the past 30 years, there’s so much we don’t know. And, even when we think we know something, we probably don’t. None of my work would have been possible if I’d kept my blinders on and not been able to see the connections between different areas in which I was working—including allowing my work in the clinic and as a social worker to inform my scientific vision. That mindset is critical to the future of science.