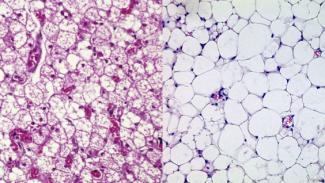 Researchers at SBP have identified a protein complex that is required for conversion of “bad” white fat to “good” brown fat. The findings, published in the Journal of Clinical Investigation, could help treat metabolic disorders such as obesity.

“Our study points to mTORC1—a protein complex that senses nutrient levels—as a key regulator of fat browning,” said Sheila Collins, Ph.D., professor in SBP’s Integrative Metabolism Program and senior author of the paper. “Therapies that promote browning, or an increase in brown fat-like cells within the typical white fat tissue, are being actively pursued as a way to help people burn more calories independent of exercise.”

Brown fat burns energy as heat, and scientists believe it evolved as a way to stay warm and survive cold weather. Adults with higher-than-average amounts of brown fat are more likely to maintain a healthy weight and are less likely to develop insulin resistance. In contrast, white fat acts as a thermal insulator that protects internal organs. An excess of white fat is associated with metabolic disease, as well as an increased risk of certain cancers.

The proportion of brown fat-like cells in white fat deposits increases upon prolonged exposure to cold temperatures, which trigger release of the hormone/neurotransmitter noradrenaline. Collins’ team found a new step in the process by which noradrenaline induces fat browning. Previous research had shown that it involves turning on protein kinase A (PKA), and this study shows that PKA activates mTORC1.

“This result came as a surprise because we knew that mTORC1 is a key player in stimulating growth in many tissues, including white fat,” added Collins. “Fat browning is thought to be an opposing process, so the fact that it requires the same protein complex is big news.”

The scientists also found that the way mTORC1 is triggered by PKA is different from how it’s activated by growth-promoting signals, such as insulin.

“Fat regulation isn’t black and white—our results help fill in the color in the picture. Imagine mTORC1 is a machine with multiple capabilities, like a printer/copier/scanner. Energy-storage signaling pushes one set of buttons and gets one outcome (fat storage), while PKA pushes another set to get a different outcome (conversion to brown fat).

“These results add an important detail to the understanding of fat browning, which will help determine which steps could be targeted by future anti-obesity drugs,” Collins concluded.