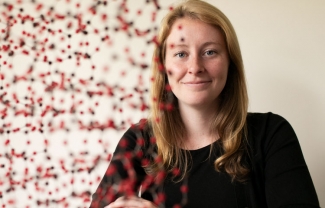 The heart is the core of life, and for Ph.D. graduate student Katja Birker, it’s the foundation for the beginning of a career.

Birker recently received a prestigious predoctoral fellowship from the American Heart Association (AHA) to continue her research on hypoplastic left heart syndrome (HLHS), a congenital heart disease that affects between two and four of every 10,000 babies born. As of today, the only cure for HLHS is three open-heart surgeries that begin two weeks after birth.

“I’m very grateful to the AHA for supporting my research,” says Birker. “I’ve embarked on a career to study the genes that contribute to HLHS, and this award will help me continue my work that may eventually lead to targeted prevention of HLHS as well as other congenital heart diseases.”

Birker is collaborating with the Mayo Clinic to identify and test whether genes found in HLHS patients—or “candidate” genes—have similar consequences in the hearts of fruit flies—a model organism for cardiovascular research. The research aims to identify novel gene functions and pathways that are likely to contribute to HLHS.

“Many believe that HLHS is a genetic disease, but the genes that are involved are not well known,” says Birker. “The fruit fly is a very good genetic system to model disease because it has many similar genes to humans and a short life span. I’m able to film videos of fly hearts to understand the impact of the candidate genes on heart function.

“My goal is to find genes that can be used in the future for the diagnosis and treatment of HLHS in babies. The research approach could also be used to screen for genes that might be involved in many other types of heart disease,” adds Birker.

The AHA supports early-career scientists with passion, commitment and focus by providing fellowships that fund their pursuit of cardiovascular research. Birker, a graduate student in the lab of Rolf Bodmer, Ph.D., professor and director of the Development, Aging and Regeneration Program, received her first AHA fellowship in 2018.