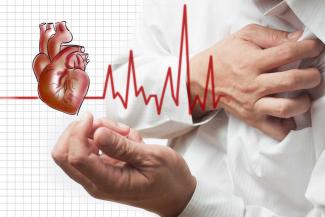 Heart failure, in which the heart can’t pump enough blood to meet the body’s demands, is currently treated as a mechanical problem of the heart, using medicines that lower blood pressure, help the heart beat stronger, or reduce demand on the heart. But it’s becoming clear that it’s not just a mechanical problem—it’s also a metabolic one.

Even before the heart becomes weaker, it responds to the stresses that produce heart failure by changing the fuels it burns. That results in a reduction in the heart’s metabolic efficiency that worsens the heart’s condition. Since the heart burns so much fuel to keep beating, and consumes fats and carbohydrates along with other available fuels, any changes in its metabolic efficiency could impact metabolism throughout the body.

New therapies for heart failure are urgently needed—it affects almost 6 million people in the U.S. and has only a 50 percent five-year survival rate. It’s also debilitating and costly. Because it reduces the amount of blood that reaches the lungs and muscles, it makes everyday tasks exhausting. And since it causes major symptoms like shortness of breath, rapid or irregular heartbeat, severe weakness and dizziness, and lung congestion, it leads to over 4 million hospitalizations per year.

In a new study, Lewandowski’s lab investigated how the heart sends out metabolic signals in response to stress, long before it becomes physically weakened, and found something surprising in the way the body and other organs respond metabolically to cardiac stress. Publishing in Circulation: Heart Failure, they observed that, upon increasing demand on the heart, the initial whole body metabolic changes are favorable.

“Our results suggest that it may be possible to develop therapies that help prevent heart failure by sustaining beneficial changes in metabolism,” Lewandowski says.

Lewandowski’s team examined the effects of artificially stressing the heart on several indicators of metabolic health, and found that at early stages, they’re all good—increased glucose tolerance and insulin sensitivity and changes in fat that make it burn energy. Later, though, those measures showed worse metabolic health.

“Now, we want to figure out how this happens at the molecular level—what signals does the stressed heart send out that change metabolism in other organs?” Lewandowski comments. “Figuring out those details could reveal targets for heart-protecting therapies.”