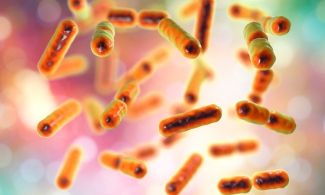 And how this relationship could help fight autoimmune diseases

Sanford Burnham Prebys researchers including Carl Ware, Ph.D., and John Šedý, Ph.D. have discovered an immunological process in the gut that could help improve treatment for autoimmune and gastrointestinal diseases. The study, published March 22 in Cell Reports, found that this process regulates the activation of white blood cells in the intestines, which ultimately helps the body control the composition of the gut microbiome.

“The immune system is like a gardener for our gut bacteria, gently monitoring and responding to their populations and keeping an eye out for unwanted pathogens” says Ware, who directs the Infectious and Inflammatory Diseases Center at Sanford Burnham Prebys. “This ultimately helps the immune system control these microbes.”

This “gardening” relies on a molecule called BTLA, one of several checkpoint proteins used by the body to control the immune system.

“This is a signaling system we’ve known about for decades, but this is a totally new function for it that we’ve never seen before,” says Šedý, a Sanford Burnham Prebys research assistant professor, who co-led the study with Ware. “I helped discover this system two decades ago, so it’s exciting that we’re still making new discoveries about its function.”

To explore the role of BTLA in the gut, the team zeroed in on specialized lymph nodes in the intestines called Peyer’s patches, which are full of white blood cells that help monitor and respond to pathogens and other microbes in the gut.

“Gut bacteria are in constant competition, and the populations of specific species can fluctuate,” says Ware. “In a healthy microbiome, there’s a balance, and disrupting that balance can contribute to autoimmune diseases, gastrointestinal disorders and even some brain disorders.”

The team found that BTLA is critical for maintaining this balance because it triggers white blood cells to release antibodies that control the populations of different gut bacteria.

Immune checkpoints like BTLA are already used in immunotherapy for some cancers, and these results make the researchers confident that this system can be leveraged to treat diseases in the gut, especially those that are also autoimmune disorders, such as Crohn's disease or ulcerative colitis.

“The immune system is unimaginably complex, and understanding it gives us the ability to manipulate it, and that can help us treat diseases,” says Šedý. “This discovery is a step forward in that larger narrative.”