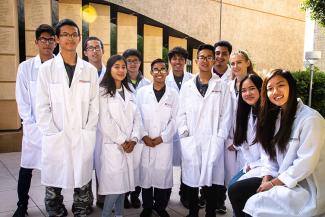 Daydreaming about prom, finally getting that driver’s license and stressing out about the SAT are common rites of passage for teens. Now, twelve high school students from The Preuss School UC San Diego—a distinguished charter school for students who would be the first of their families to graduate from college—can add undertaking real-world biomedical research to their list of high school memories.

These soon-to-be juniors spent two weeks in July working directly with SBP scientists as part of the SBP Preuss program. Thanks to the generous contributions of Peggy and Peter Preuss and Debby and Wain Fishburn, for more than a decade this summer program has introduced high school students to laboratory research with the hope of inspiring future scientists.

Rotating between four labs during a period of two weeks, these students used laboratory techniques such as micropipetting, microscopy and gel electrophoresis to help reveal the underlying causes of diabetes, aging and heart disease.

At the end of the program, the students presented their findings and experiences to SBP scientists and staff, including SBP’s president, Kristiina Vuori, M.D., Ph.D.; the Preuss School’s director of development, Tamika Franklin; program donors; and the students’ family members. For students interested in taking an even deeper dive into the science, they have the opportunity to return for a separate six-week, full-time program at SBP.

We spoke with three students to hear more about their experiences during the two-week program, if a science career is in their future and any surprises they encountered along the way.

Tell me a bit more about what you have experienced at SBP.
"What I remember most is taking DNA from three mice and figuring out which mouse had been genetically changed. We used enzymes to amplify the DNA, which is a technique called PCR (polymerase chain reaction). Then we waited, and a day later we used a paper [gel electrophoresis] to determine which mouse was wild type (meaning normal, or found in the wild), which had one gene missing (heterozygous) and which of our samples was just water (a negative control)."

Were you surprised by any of your experiences at SBP?
"I learned that there is a lot of waiting in science! But it’s all for a good reason."

Do you think you want to become a scientist?
"I’ve always been interested in science, but I’m still conflicted about whether I want to be an engineer or a scientist. That’s why I enrolled in this program, so I could “try before I buy.” I learned I really liked how hands-on science is. We’ll see!"

Tell me a bit more about what you have experienced at SBP.
"We worked with zebrafish to visualize different parts of the animal. We added a colored dye and used a microscope to see different structures, like DNA and red blood cells. I hadn’t ever used a microscope before, so that was a really interesting experience."

Were you surprised by any of your experiences at SBP?
"People usually think science is someone working by themselves at their desk. But there is so much communication in science. You have to talk to people about your project, why it works and what you are doing. I really liked that—there is more interaction than I had thought."

Do you think you want to become a scientist?
"I definitely want to be a scientist, but I’m not sure what kind yet, I also like chemistry and biochemistry. I really liked being part of this program because I could learn what being a scientist is like and see the actual environment. It’s so great that I get to experience this as an incoming junior and learn now if this is what I want to do in the future."

Tell me a bit more about what you have experienced at SBP.
"We visited a lab studying fruit flies to see how they can help people with diabetes, which affects a lot of Americans. They fed the flies a high-fat diet of coconut oil, and their heartbeats are abnormal. We used a microscope to look at the flies’ heartbeats, recorded the heart rate on video and analyzed how fast it was, which was pretty cool."

Were you surprised by any of your experiences at SBP?
"There were so many fruit flies! There were hundreds of vials of flies. That was pretty incredible to see."

Do you think you want to become a scientist?
"It was really cool to see how science is practiced. But right now I think I want to be a doctor who delivers babies."