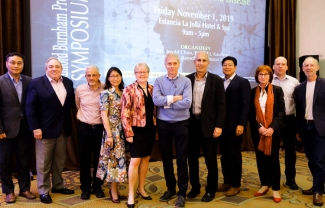 A mother who no longer remembers her son. A daughter who took doctor-prescribed pain medication and slipped into addiction. A father who has trouble grasping a pen and eventually becomes unable to walk. Neurological disorders are some of the most painful and complex conditions our society faces today. Yet much about the brain remains unknown, hindering our ability to help people with these disorders.

To help shed light on the brain’s mysteries, on November 1, 2019, more than 250 neuroscientists gathered at Sanford Burnham Prebys’ one-day symposium to share their latest discoveries. Organized by professors Jerold Chun, M.D., Ph.D.; Randal Kaufman, Ph.D.; Barbara Ranscht, Ph.D.; and Huaxi Xu, Ph.D., the event attracted scientists from around the world eager to learn more about biological clues that are leading to effective therapies. Read the full list of the invited speakers and their talks.

“Nearly every day we read about the toll neurological diseases such as Alzheimer’s, dementia, mental health disorders and more take on our society,” said Kristiina Vuori, M.D., Ph.D., president of Sanford Burnham Prebys, in her introductory address. “Our symposium brings together scientists at the frontiers of brain research who share their latest discoveries to open new paths toward new and better treatments.”

More than 50 million Americans are affected by neurological disorders, including Alzheimer’s disease, dementia, addiction and more, according to the National Institute of Neurological Disorders and Stroke. Most of these conditions are not well addressed by current medicines.

At the symposium, world-renowned scientists from Stanford University, Mount Sinai, University of Vienna and other top-tier institutes gave talks describing their strategies to uncover the molecular basis of brain disorders and how these discoveries are advancing potential therapies. A national plan to address Alzheimer’s and other dementia types was described by Eliezer Masliah, M.D., the National Institute of Aging’s director of the Division of Neuroscience.

“This was my first scientific conference, and it was perfect for learning about a wide range of cutting-edge brain research,” said attendee Jaclyn Beck, a Ph.D. student at UC Irvine who studies the role of the brain’s immune cells, called microglia, in Alzheimer’s disease. “I have several pages of notes from the talks detailing findings I want to investigate and people I want to contact.”

For the past 40 years, our Institute has invited leading experts on one scientific topic to share their latest research at an annual symposium. By encouraging connection and collaboration, we hope to inspire insights that improve human health. The 41st annual symposium will take place in November 2020 and focus on the biology of organelles, specialized pouches within cells that carry out critical functions such as generating power and breaking down waste, and its role in health and disease.