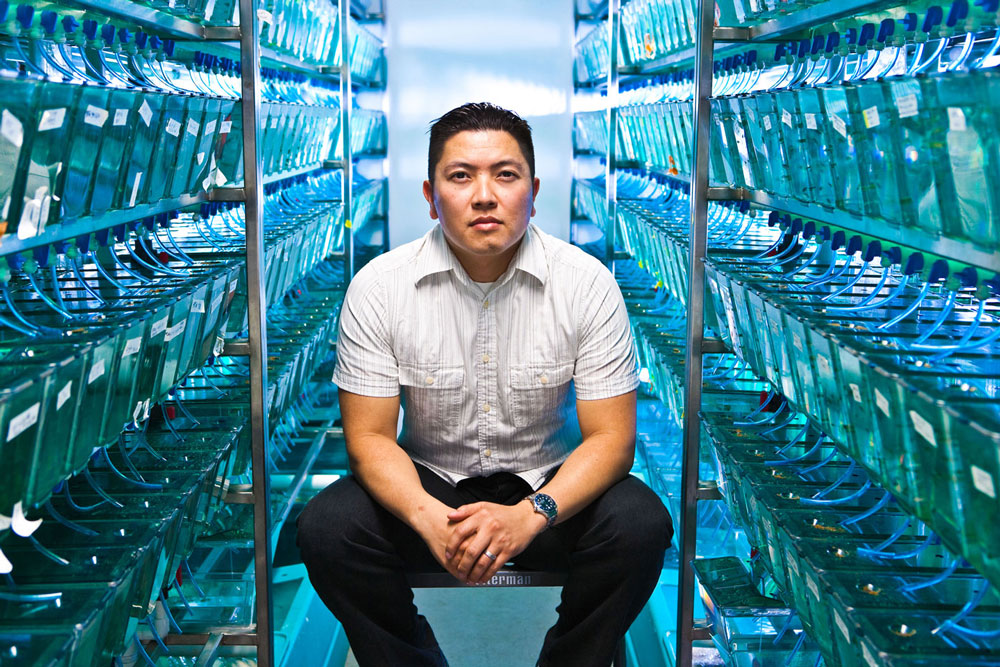 A new study led by researchers at Sanford Burnham Prebys Medical Discovery Institute (SBP) identifies potential new therapeutic avenues for patients with Alagille syndrome. The discovery, published in Nature Communications, identifies the cells and genes in zebrafish necessary to make liver ducts, thin tubes that transport a fluid called bile from the liver to the gallbladder and small intestine. Patients with Alagille syndrome have fewer than the normal number of liver ducts, causing jaundice, liver disease and liver failure.

“We use zebrafish to study Alagille syndrome because these vertebrates allow us to use experimental approaches that aren’t possible with other disease models,” says Duc Dong, Ph.D., assistant professor in the Human Genetics Program at SBP and senior author of the paper. “Organ development, especially the liver, is highly conserved among vertebrates—including zebrafish—and the mutations we create in zebrafish alter embryogenesis in a manner consistent with humans, making it an ideal model system to study diseases such as Alagille syndrome.”

Alagille syndrome is a rare genetic disorder caused by mutations primarily in the JAGGED1 gene. In less than 1 percent of cases, a mutation in the NOTCH2 gene is the cause. The disorder has an estimated prevalence of 1 in 70,000 births and can affect the liver, heart, kidneys, blood vessels and other tissues of the body. One of the major features of Alagille syndrome is liver damage caused by loss of liver ducts. There is presently no drug or surgical procedure that can correct for the loss of liver ducts.

“We wanted to gain further insight into the way Jagged works during liver development,” says Dong. “We already knew that Jagged triggers Notch signaling in neighboring cells—a key step in the development of many organs, including liver. But a deeper understanding of how Jagged regulates duct cell formation in livers could shape strategies to help fix these structures to potentially spare the 10 to 30 percent of patients that eventually need a liver transplant.”

Using mutant zebrafish, the research team discovered that Jagged signals come from an unexpected cell type, endoderm-derived cells within the liver itself, stimulating duct cell identity in the liver. The findings contrast with research in mice, which suggest ducts are malformed due to insufficient Jagged signals from cells in hepatic veins. Dong’s team demonstrated that Jagged directly triggers Notch activity to generate all duct cells in the liver.

“Our findings are important because knowing the location and specific cell type that require Jagged expression gives us the information we need to target therapeutics to the right place to compensate for the lack of Jagged function in Alagille syndrome,” says Dong. “And with advances being made in gene therapy using technologies like CRISPR/Cas9, our discoveries put us closer to being able to deliver genetic ‘corrections’ of JAGGED1 mutations.

“Because duct cells are lost due to a lack of Jagged function, and are not just malformed as previously thought, we now need to also consider regenerative therapeutic approaches to replace duct cells lost in this disease. Indeed, we have unpublished data suggesting that duct cells can regenerate when we allow normal Jagged function to resume.”

“We are also exploring the possibility of using zebrafish to identify potential drugs that could alleviate pathologies caused by loss of Jagged function,” adds Dong. “In fact, we are now gearing up for a chemical screen and working on finding funding for this project.”

“This study shows the value in studying alternative disease models. In this case, zebrafish were critical for advancing our understanding of Jagged function in the liver, allowing us to devise new therapeutic strategies for Alagille Syndrome.”

About SBP
Sanford Burnham Prebys Medical Discovery Institute (SBP) is an independent nonprofit medical research organization that conducts world-class, collaborative, biological research and translates its discoveries for the benefit of patients. SBP focuses its research on cancer, immunity, neurodegeneration, metabolic disorders and rare children’s diseases. The Institute invests in talent, technology and partnerships to accelerate the translation of laboratory discoveries that will have the greatest impact on patients. Recognized for its world-class NCI-designated Cancer Center and the Conrad Prebys Center for Chemical Genomics, SBP employs about 1,100 scientists and staff in San Diego (La Jolla), Calif., and Orlando (Lake Nona), Fla. For more information, visit us at SBPdiscovery.org or on Facebook at facebook.com/SBPdiscovery and on Twitter @SBPdiscovery.