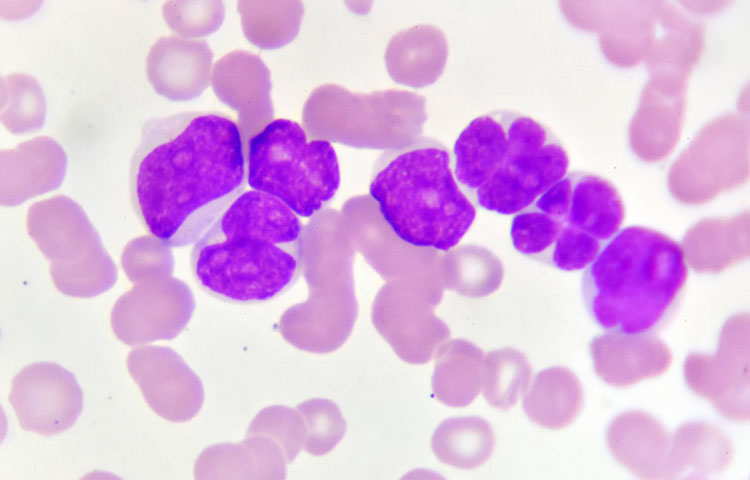 Scientists have identified two drugs that are potent against acute myeloid leukemia (AML) when combined, but only weakly effective when used alone. The researchers were able to significantly enhance cancer cell death by jointly administering the drugs that are only partially effective when used as single-agent therapies. The study, a collaboration between Sanford Burnham Prebys Medical Discovery Institute and the University of Glasgow, was recently published in the journal Nature Communications.

“Our study shows that two types of drugs, MDM2 inhibitors and BET inhibitors, work synergistically to promote significant anti-leukemia activity,” says Peter Adams, Ph.D., a professor at Sanford Burnham Prebys and senior author of the study. “The results were surprising because previous research had shown that each drug on its own had modest benefit against AML. The new research provides scientific rationale to advance clinical studies of the drug combination in patients with AML.”

There are many types of AML, and different cases have different chromosome changes, gene mutations and epigenetic modifications, making it difficult for researchers to find novel therapies that will work for a substantial proportion of patients. Although much progress has been made toward finding effective treatments in recent years, the long-term overall survival has stagnated. According to the American Cancer Society, the five-year survival rate for adults with AML remains less than 30%.

Notably, TP53, the most frequently mutated gene in all human cancers, is found unaltered in about 90% of AML patients. Since the product of the TP53 gene, p53, acts to suppress tumors, scientists have sought drugs that reactivate or boost its anti-cancer powers in AML, which should provide a clinical benefit. However, such drugs on their own have been disappointing in AML.

“We were interested in combining MDM2 and BET inhibitors because each showed encouraging pre-clinical activity, but limited activity when given to patients as a single agent,” says Adams. “Previous research had shown that MDM2 inhibitors activate p53, and BET inhibitors suppress genes associated with leukemias—but not p53.

“Our research unexpectedly showed that like MDM2 inhibitors, BET inhibitors activate p53, but through a different pathway. BET inhibitors mute the power of a protein called BRD4, which we found is a p53 suppressor in AML,” says Adams. “Between the two drugs, you end up with a ‘double whammy’ effect that fully unleashes the anti-cancer activity of p53.

“Better therapies for AML are desperately needed,” adds Adams. “This study illustrates that targeting BRD4 as part of a combination therapy holds promise for patients diagnosed with this very dangerous disease.”

This work was funded by CRUK program grant C10652/A16566, The Children with Cancer UK, the Howat Foundation, the Wellcome Trust (grant number 105641/Z/14/Z), the Sussex Cancer Fund, the CRUK Glasgow Centre (A25142), Core Services at the Cancer Research UK Beatson Institute (A17196), the Glasgow Experimental Cancer Medicine Centre, which is funded by Cancer Research UK and the Chief Scientist’s Office, Scotland, and the Sussex Cancer Fund.