Researchers dig deeper into how cells transport their waste for recycling 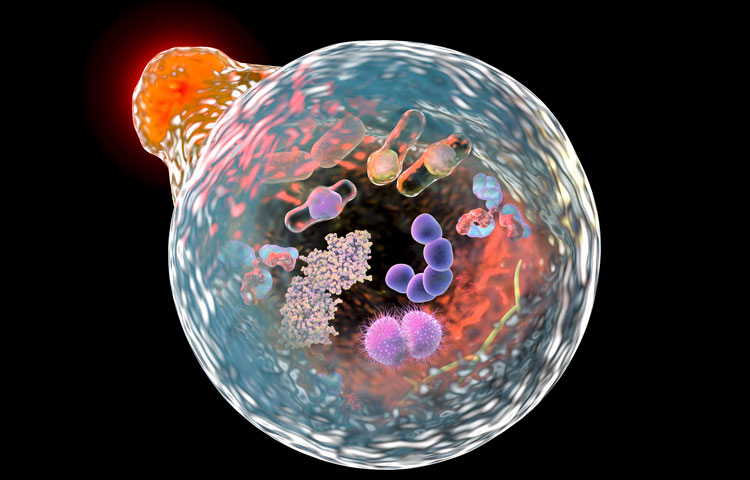 Findings may have important implications for understanding age-related diseases

Scientists at Sanford Burnham Prebys have gained a deeper insight into the intricacies of autophagy, the process in which cells degrade and recycle cellular components. The findings, published in Current Biology, describe how the “trash bags” in a cell—called autophagosomes—are tagged to direct their movement to the cellular “recycling plants” where waste is processed. The research opens new paths to understanding the relationship between autophagy and age-related diseases such as cancer and neurological disorders.

“Our latest study identifies how a chemical modification (phosphate related tag) of a key autophagosome component, the protein called LCB3, helps direct the transport of autophagosomes within the cell in the right direction,” says Malene Hansen, Ph.D., professor at Sanford Burnham Prebys and senior author of the study. “We previously reported that LCB3, which is found on the surface of autophagosomes, needs to be tagged for autophagy to function effectively. Now we have a better understanding of how tagging happens and how important it is for autophagosome movement.”

In addition to their own laboratory studies, the Hansen lab worked with colleagues in the lab of Sandra Encalada, Ph.D., at the Scripps Research Institute, San Diego, leaders in the field of transport of cellular components in neurons. Those investigations showed that blocking the chemical modification of the LC3B protein disrupted the efficient transport of autophagosomes toward the cellular recycling plants.

“Waste transport in a cell is like moving garbage trucks down a highway,” says Jose Luis Nieto-Torres, Ph.D., a postdoc in the Hansen laboratory and first author of the study. “Together with our collaborators, we studied the process in nerve cells because they are long and flat, which helps us observe the directional aspects of transport, a critical aspect for waste recycling via autophagy.

“We clearly saw that if phosphate tagging of LC3B was hampered, autophagosomes, or the trash bags filled with waste, failed to move in the direction of lysosomes—cell’s recycling plant. This is potentially very harmful to the health of a cell. It’s somewhat analogous to what would happen if a garbage truck didn’t pick up your trash—your waste could accumulate, become scattered in the neighborhood and create a health hazard.”

As a next step, the researchers want to figure out which waste products are selected for recycling and how a cell determines when to start moving the waste.

“My lab’s research efforts are focused on the relationship between aging and autophagy,” concludes Hansen. “Based on this discovery, we have a new, potential entry point to modulate the activity of recycling in a cell, which may prove relevant to understanding the diminished functions of autophagy that are known to occur in aging cells. Such insights could ultimately lead to new drug targets to combat age-related diseases as well as potential diagnostic markers to assess autophagy ‘health,’ an important goal for the future.”

Research reported in this press release was supported by funding to Jose L. Nieto-Torres by a Fundacion Ramon Areces Postdoctoral Fellowship and a K99/R00 pathway to independence National Institutes of Health (NIH) grant (K99AG062774); Romain Chassefeyre was supported by the George E. Hewitt Foundation for Medical Research; and Tai Chaiamarit was supported by a Royal Thai Government Scholarship from the Development and Promotion of Science and Technology Talents Project. This work was also funded by grants to Sandra E. Encalada: an NIH R01 AG049483 grant; the Glenn Foundation for Medical Research Glenn Award for Research in Biological Mechanisms of Aging; a New Scholar in Aging Award from the Lawrence Ellison Foundation; the Baxter Family Foundation; and to Malene Hansen, an NIH R01 GM117466 grant.