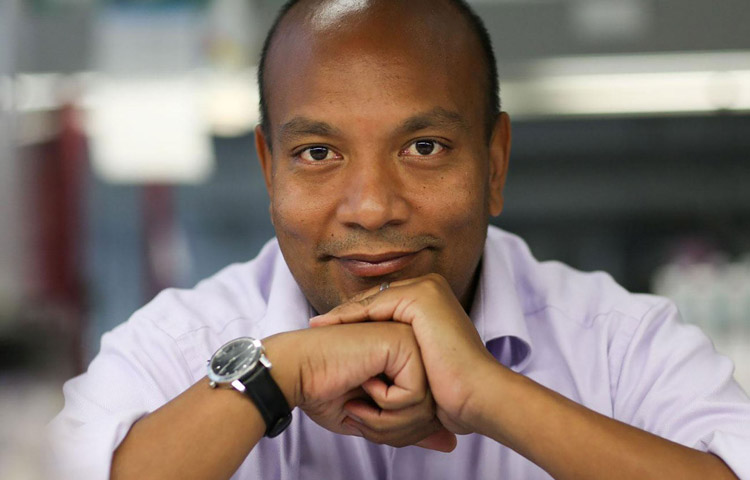 Sanford Burnham Prebys Medical Discovery Institute is pleased to announce that Sumit Chanda, Ph.D., has received a $10.2 million, four-year grant from the Department of Defense to develop and advance broad-spectrum antivirals for respiratory diseases. The award aims to provide U.S. military forces and the nation with safe, effective and innovative therapies that combat multiple types of respiratory viruses.

“We want to move away from the ‘one-bug-one-drug’ paradigm and develop drug candidates that are effective against multiple respiratory viruses,” says Chanda, director of the Immunity and Pathogenesis Program at Sanford Burnham Prebys. “While respiratory diseases caused by bacteria are relatively simple to treat with broad-spectrum antibiotics, we don’t have the same type of medications available for viral respiratory infections. Broad-spectrum respiratory antiviral drugs could greatly benefit military personnel in settings where point-of-care diagnostics are not available, as well as when a virus seemingly comes out of nowhere, like SARS-CoV-2 did.”

Most antiviral drugs selectively target a single virus, providing a “one-bug-one-drug” solution. In contrast, bacterial infections are often treated with broad-spectrum antibiotics that can not only be used against a wide variety of bacteria but also against infections where the type of bacteria has yet to be identified. The availability of broad-spectrum respiratory antivirals would enable military personnel to be treated early, prior to a diagnosis, thereby reducing the likelihood of secondary infections and spread throughout closely housed military quarters.

“Our strategy to develop broad-spectrum respiratory antivirals is to target host (human) proteins, rather than current strategies that target viral proteins,” Chanda explains. “This is necessary because viruses are profoundly different from bacteria— in order to survive, they hijack our cellular machinery to make millions of copies of themselves. If we can protect the features in our cells that viruses depend on for their life cycle, we can prevent their replication and spread. Since different respiratory viruses take advantage of the same host functions, one drug could be effective against many viruses.”

Respiratory viruses are the most commonly diagnosed medical conditions among military recruits and trainees. During 2005 and 2006 in Iraq and Afghanistan, deployed military experienced respiratory illness at a rate of approximately 15% per month, with overall rates at approximately 40% of all personnel. These infections can significantly impact training and readiness, putting the nation at risk.

The research team currently has four preclinical drug-like small molecules that exhibit broad-spectrum activity. Their goal is to advance at least two antivirals upon the completion of the project that can be quickly transitioned to the clinic. They are currently focused on evaluating if these molecules can by optimized and deployed to address the current SARS-CoV-2 pandemic.

“We anticipate that these respiratory antivirals could treat infections caused by viruses including influenza A and B, human rhinoviruses, respiratory syncytial virus, adenoviruses—and importantly—coronaviruses,” says Adolfo García-Sastre, Ph.D., professor in the Department of Microbiology and co-director of the Global Health & Emerging Pathogens Institute at the Icahn School of Medicine at Mount Sinai, and collaborator on the project. “Our collective experience in researching the molecular biology of viruses will lead to new approaches to combat deadly respiratory viruses that affect millions of people and lay the groundwork for protecting us against viruses yet unknown.”