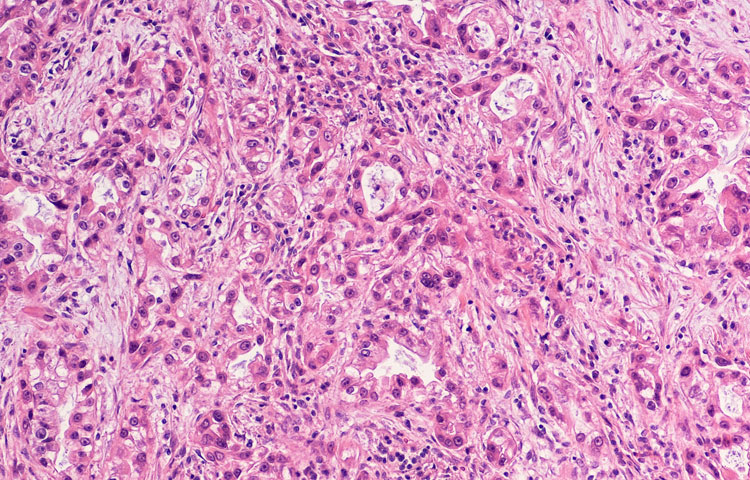 Scientists demonstrated for the first time that blocking “cell drinking,” or macropinocytosis, in the thick tissue surrounding a pancreatic tumor slowed tumor growth.

Scientists at Sanford Burnham Prebys Medical Discovery Institute demonstrated for the first time that blocking “cell drinking,” or macropinocytosis, in the thick tissue surrounding a pancreatic tumor slowed tumor growth—providing more evidence that macropinocytosis is a driver of pancreatic cancer growth and is an important therapeutic target. The study was published in Cancer Discovery, a journal of the American Association for Cancer Research.

“Now that we know that macropinocytosis is ‘revved up’ in both pancreatic cancer cells and the surrounding fibrotic tissue, blocking the process might provide a ‘double whammy’ to pancreatic tumors,” says Cosimo Commisso, Ph.D., associate professor and co-director of the Cell and Molecular Biology of Cancer Program at Sanford Burnham Prebys and senior author of the study. “Our lab is investigating several drug candidates that inhibit macropinocytosis, and this study provides the rationale that they should be advanced as quickly as possible.”

Pancreatic cancer remains one of the deadliest cancers. Only one in ten people survive longer than five years, according to the American Cancer Society, and its incidence is on the rise. Pancreatic cancer is predicted to become the second-leading cause of cancer-related deaths in the U.S. by 2030.

“If we want to create a world in which all people diagnosed with pancreatic cancer will thrive, we first need to understand the key drivers of tumor growth,” says Lynn Matrisian, Ph.D., chief science officer at the Pancreatic Cancer Action Network (PanCAN), who wasn’t involved in the study. “This study suggests that macropinocytosis is an important target for drug development, and that progressing this novel treatment approach may help more people survive pancreatic cancer.”

Pancreatic tumors are surrounded by an unusually thick layer of stroma, or glue-like connective tissue that holds cells together. This stromal barrier makes it difficult for treatments to reach the tumor, and fuels tumor growth by providing the tumor with nutrients. Commisso’s previous research showed that rapidly growing pancreatic tumors obtain nutrients through macropinocytosis, an alternative route that normal cells don’t use—and he wondered if macropinocytosis in the stroma may also fuel tumor growth.

“We are excited about this approach because instead of removing the stroma, which can cause the tumor to spread throughout the body, we simply block the process that is driving tumor growth,” says Yijuan Zhang, Ph.D., postdoctoral researcher in the Commisso lab and first author of the study. “We also deciphered the molecular signals that drive macropinocytosis in the stroma, providing new therapeutic avenues for pancreatic cancer researchers to explore.”

Based on their ongoing macropinocytosis research, the scientists have identified many druggable targets that may inhibit the process. Bolstered by this study’s findings, they will continue to investigate the promise of drug candidates that inhibit macropinocytosis as potential pancreatic cancer treatments.

“We already knew that macropinocytosis was a very important growth driver for pancreatic cancer, as well as lung, prostate, bladder and colon tumors,” says Commisso. “This study further spurs our efforts to advance a drug that targets macropinocytosis, which may be the breakthrough we need to finally put an end to many deadly and devastating cancers.”