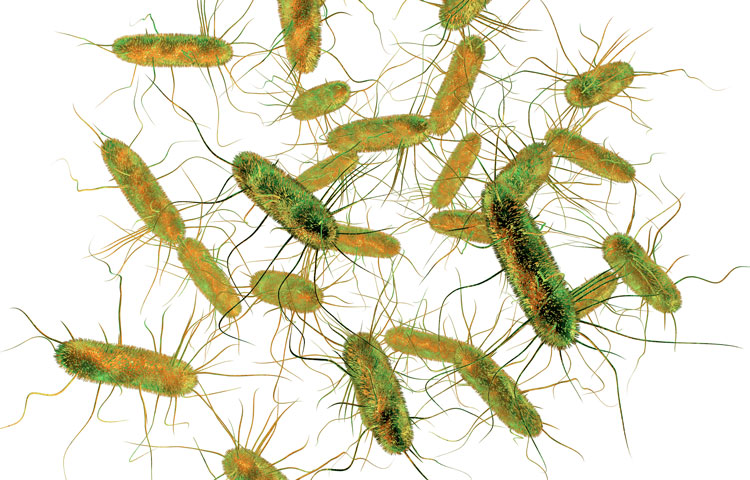 An international research group, led by Jamey Marth, Ph.D., a professor at Sanford Burnham Prebys, has shown that the Neuraminidase 3 (Neu3) enzyme is responsible for the onset and progression of colitis—a chronic digestive disease caused by inflammation of the colon. The study, recently published in the Proceedings of the National Academy of Sciences, was performed in a model of recurrent human food poisoning previously linked with the condition. The findings represent a scientific advance toward a targeted therapy to help the millions of people worldwide affected by the disorder.

“Our new research demonstrates how increased activity of Neu3—an enzyme found in the gut—triggers an inflammatory cascade that leads to disease,” says Marth. “Prior to this study, we knew that a neuraminidase enzyme was involved, but didn’t know the source of the enzyme.

“We're now looking at an intrinsic mechanism of protein aging and turnover that’s being modified by a foodborne pathogen,” says Marth. “The pathogen targets the protein aging process in the intestinal tract, thereby diminishing the expression of a key anti-inflammatory enzyme that would normally prevent the onset of colitis and inflammatory bowel diseases (IBDs).

“That enzyme is intestinal alkaline phosphatase (IAP), which detoxifies bacterial toxins, and its augmentation is also the rationale for current clinical trials in the treatment of colitis and sepsis.

“The problem starts when the ST pathogen is ingested and triggers our immune system to ‘amp up’ Neu3 neuraminidase expression,” adds Marth. “Increased activity of Neu3 leads to a reduced life span of IAP, and that impairs the ability to detoxify a damaging endotoxin normally found among bacteria in the gut—and this leads to chronic gut inflammation.”

Inhibiting Neu3 with the antiviral drug Relenza (used to treat influenza) broke that chain, reduced inflammatory cytokine expression and prevented severe colitis. However, current neuraminidase inhibitors such as Relenza and Tamiflu are optimized for viral and bacterial neuraminidases and would need further development to be clinically effective against the human form of Neu3.

“We had to increase the oral dose of Relenza well above that recommended for use in humans,” says Marth. “It worked without apparent side effects; however, a new generation of neuraminidase inhibitors that target the mammalian enzyme is needed. Several research groups are now focusing on developing clinically relevant inhibitors.

“We were rather surprised that the culprit turned out to be Neu3, as many bacteria in the gut are capable of synthesizing their own neuraminidase enzymes,” Marth notes. “Based on the genetic proof in our study, inhibiting Neu3 would be expected to have a positive therapeutic impact. But there’s also another option: augmenting IAP appears to be equally beneficial. Perhaps a dual approach including both oral Neu3 inhibition and oral IAP augmentation simultaneously could be even more effective at reducing inflammation and preventing the onset of colitis.”

Acknowledgments
Research reported in this press release was supported by NIH grants HL131474 and DK04824, the Mizutani Foundation for Glycoscience, and the Wille Family Foundation. Additional support was provided by the Yonsei Research Fund (2019-22-0020) and the National Research Foundation of Korea (NRF) Ministry of Science, ICT and Future Planning NRF-2016R1A5A1010764 and NRF-2020R1A2C101232911.