“We are desperate for new therapies” 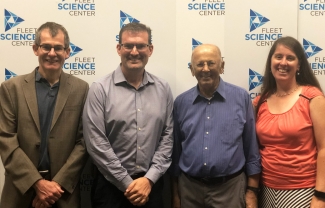 Bill Veljovich had never been sick in his life. “Not even joint pain,” shared the 80-year-old retired engineer at our recent Fleet Science Center discussion about acute myeloid leukemia (AML), a life-threatening type of blood cancer. He was joined by experts from Sanford Burnham Prebys and UC San Diego Health.

However, his doctor noticed that his white blood cells counts were off during a routine blood test. He was diagnosed with a blood cancer called myelodysplastic syndrome (MDS), which progressed to AML (this occurs in one out of three people with MDS). Fortunately, Veljovich responded well to a then off-label treatment that only recently was approved for older patients with AML.

“The truth is, we are desperate for new therapies,” said speaker Rafael Bejar, M.D., Ph.D., a clinician at UC San Diego who specializes in blood cancers. “AML typically occurs in people over the age of 60, who often aren’t able to tolerate intensive chemotherapies.”

Until two years ago, the treatments for AML remained the same as those used in the 1970s: a chemotherapy combination and perhaps a bone marrow transplant. Only 24% of adults with AML remained alive five years after treatment.

Now, thanks to foundational research that revealed the underlying genetic drivers of AML, eight new drugs have been approved in the past two years. Several more targeted therapies are nearing potential FDA approval.

However, AML, which usually arises in cells that turn into white blood cells, is an incredibly complex and fragmented disease. Genome sequencing has revealed that more than 30 genes drive the cancer. Many different treatment types will be needed to truly conquer AML.

Peter Adams, Ph.D., a professor in Sanford Burnham Prebys’ National Cancer Institute (NCI)-designated Cancer Center, hopes to find a treatment that works for a broader AML population. He focuses on a protein called p53, often called the “guardian of our genome.” This protein senses DNA damage and kills the faulty cell—protecting us from developing cancer. However, to scientists’ surprise, 90% of people with AML have a normal p53 gene.

“Emerging research suggests that AML inactivates p53 through other means,” said Adams. “My team is working to develop a drug combination that could reactivate the protective powers of p53—and thus fight AML.”

“I’ve always taken the approach of learning as much as possible—and then fixing the problem,” said Veljovich, who designed and tested rocket engines before he retired. “I have learned that blood cancers are extremely complex. I wish there was a simple solution, but there isn’t. I’m grateful that we have smart folks like Dr. Bejar and Professor Adams who are working on these tough problems to find better medicines for AML.”

This event was the second of our five-part “Cornering Cancer” series. Join us for discussions on breast cancer (October 20), pancreatic cancer (November 17) and pediatric brain cancer (December 8). Register today.