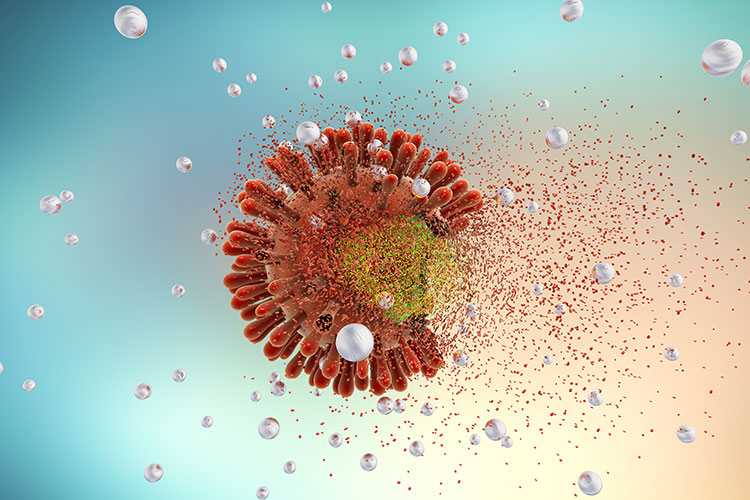 Called “shock and kill,” the approach aims to activate and then eliminate all dormant HIV.

“What scientists have found with other ‘shock’ approaches is that they can be too hot and overactivate the immune system, or too cold and don’t wake up the virus,” says Sumit Chanda, Ph.D., director of the Immunity and Pathogenesis Program at Sanford Burnham Prebys and the study’s lead corresponding and co-senior author. “Our research identifies a drug that works in the ‘Goldilocks’ zone—it reawakens the virus without activating the immune system. Our work also provides further evidence that this drug class, called Smac mimetics, is a promising approach to reactivating latent HIV.”

Antiretroviral therapy (ART) has increased the life expectancy of people with HIV by decades—with many individuals now living as long as the general population. However, because HIV is able to hide in reservoirs in the body, infected individuals never fully clear the disease, and ART must be taken every day for the rest of an individual’s life to keep the virus inactive. Like other chronic treatments, non-adherence rates for ARTs are estimated at 30%. Non-adherence increases the likelihood that HIV will progress to AIDS, the later stage of the infection, and also increases the risk of treatment resistance.

This research builds upon the scientists’ previous discovery that Smac mimetics—which have undergone human safety testing and are currently in clinical trials for certain cancers—can reactivate latent virus in cells from people with HIV undergoing ART. In parallel, scientists are exploring ways to kill the reactivated virus—such as developing broadly neutralizing antibodies or modified T-cells (CAR-T cell therapy) that destroy infected cells—which would complete the “shock and kill” strategy.

In this study, the researchers administered Ciapavir to mice with a human immune system and were infected with HIV. The treatment significantly increased levels of HIV in the blood and bone marrow—indicating that the latent virus was activated. Importantly, immune activation was minimal. Overactivation of the immune system can be deadly and has historically been a problem with the “shock and kill” approach.

“Ciapavir is the first Smac mimetic specifically optimized for an HIV cure, so it is significantly more potent for HIV than other molecules in this class,” says Nicholas Cosford, Ph.D., deputy director of the NCI-designated Cancer Center at Sanford Burnham Prebys and co-senior author of the study. “As a result, Ciapavir may be effective when used on its own instead of in combination with a second drug, as our previous research showed, and potentially at lower doses.”

Ciapavir is a small molecule that awakens dormant HIV by activating non-canonical NF-κB signaling in CD4+ T cells, the target of HIV. This lesser-used pathway only activates a subset of the immune system—which is the key to the drug’s gentle approach.

“Non-canonical NF-κB signaling is part of the immune system’s ‘plan B’ response to pathogens,” explains Lars Pache, Ph.D., research assistant professor in the Chanda lab at Sanford Burnham Prebys and first author of the study. “In this case, we are using this alternate pathway to our advantage. We can wake up the virus without overwhelming the immune system.”

Ciapavir will next undergo further evaluation in nonhuman primates, as well as additional toxicology studies to ensure that the drug is ready for testing in humans.

“Early shock and kill attempts to cure HIV used repurposed drugs and did not achieve their goal of reactivating latent HIV to useful levels,” says Rowena Johnston, Ph.D. , vice president and director of research at amfAR, The Foundation for AIDS Research. “It’s encouraging to see the HIV cure field move towards purpose-built therapeutics to achieve what has so far been an elusive goal.”

More than 37.9 million people around the world are living with HIV, according to the World Health Organization, including 1.1 million people in the U.S. The virus infects the CD4+ T cells of the immune system. As the infection progresses, the immune system is destroyed, which makes people more vulnerable to other infections and diseases. Without medicine, people with AIDS—or late-stage HIV—typically survive about three years.

Research reported in this press release was supported by the National Institutes of Health (P30AI036214, R01AI124843, R01CA195227, P30CA030199) and the James B. Pendleton Charitable Trust.
The co-senior authors of the study are Cosford, Jerome Zack of UCLA, and Chanda, who is also the corresponding author. Additional study authors include Matthew Marsden of UCLA and Peter Teriete of Sanford Burnham Prebys, who contributed equally to the study; Alex Portillo, Dominik Heimann and Maria Celeridad of Sanford Burnham Prebys; Jocelyn Kim, Mohamed Soliman, Melanie Dimapasoc and Camille Carmona of UCLA; and Adam Spivak and Vicente Planelles of the University of Utah School of Medicine.