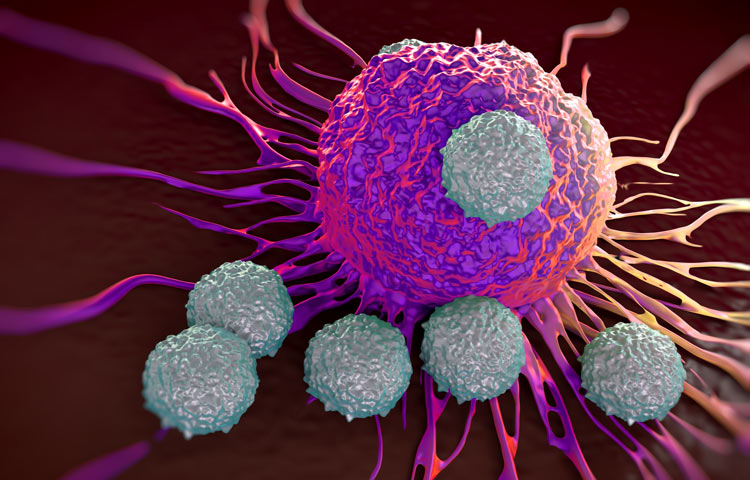 The findings support efforts to target the gut microbiome to enhance the efficacy of cancer therapy.

Scientists at Sanford Burnham Prebys Medical Discovery Institute have shown that two prebiotics, mucin and inulin, slowed the growth of melanoma in mice by boosting the immune system’s ability to fight cancer. In contrast to probiotics, which are live bacterial strains, prebiotics are “food” for bacteria and stimulate the growth of diverse beneficial populations. The study, published today in Cell Reports, provides further evidence that gut microbes have a role in shaping the immune response to cancer, and supports efforts to target the gut microbiome to enhance the efficacy of cancer therapy.

The research specifically opens new avenues to address important unmet clinical needs in melanoma, as it highlights the possible impact of prebiotics on tumor growth control and therapy resistance.

“Earlier studies have demonstrated that prebiotics limit tumor growth, but until now the mechanism by which they do so has been unclear,” says Ze’ev Ronai, Ph.D., professor in Sanford Burnham Prebys’ Tumor Initiation and Maintenance Program and senior author of the study. “Our study shows for the first time that prebiotics limit cancer growth by enhancing anti-tumor immunity. The study supports further exploration of the potential benefits of prebiotics in treating cancer or augmenting current therapies.”

Ronai cautions that these findings require much more study before considering any evaluation in people with cancer.

“Prebiotics represent a powerful tool to restructure gut microbiomes and identify bacteria that contribute to anti-cancer immunity,” says Scott Peterson, Ph.D., professor in Sanford Burnham Prebys’ Tumor Microenvironment and Cancer Immunology Program and co-corresponding author of the study. “The scientific advances we are making here are getting us closer to the idea of implementing prebiotics in cutting-edge cancer treatments.”

Adds Jennifer Wargo, M.D., associate professor of Surgical Oncology and Genomic Medicine at the University of Texas MD Anderson Cancer Center, “Immunotherapies and targeted treatments such as MEK inhibitors are helping people with melanoma, but not everyone. While some patients respond to therapy, others do not. In addition, many patients develop resistance to treatment which requires alternate medicine combinations. Manipulating the microbiome with prebiotics might be a helpful addition to current treatment regimens, and today’s finding should be further tested in independent models and systems.”

In the study, the scientists set out to identify specific prebiotics that promote the growth of good bacteria and activate anti-tumor immunity. Based on previous studies conducted in a lab dish, they homed in on mucin, a protein that is part of the mucus found in our intestine and other tissues; and inulin, a fiber found in plants such as asparagus and onions.

The researchers then embarked on a series of studies that involved feeding healthy mice either mucin or inulin in their water and food, respectively, and then transplanting melanoma or colon cancer cells to determine the effect of the prebiotics. Their experiments showed that:

“Our findings are a step forward in our understanding of how certain prebiotics affect tumor growth, but we are far from applying these to humans,” says Ronai. “Future studies need to be conducted in more complex animal models of different genetic backgrounds and ages to address the complex nature of human tumors before we may consider evaluating these prebiotics in people.”